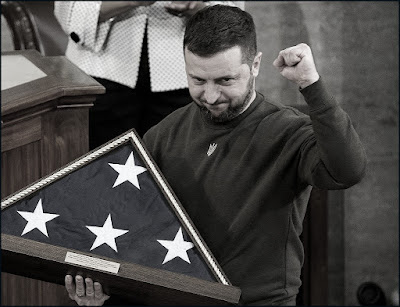 I cannot believe how many jerks in Congress and on TV were worried about how Zelensky was dressed when he appeared before Congress.

That morning the guy was on the front lines handing out medals to true heroes while all of these sleazes were taking up wasted oxygen instead of worrying about how to support Ukraine and help its brave people stop Putin in his tracks.

Zelensky is one of the truest examples of a modern-day hero, a David who has taken on Goliath. My only irate question is, who gives a flying fuck what he wore to Congress? As if scores of senators and representatives haven't already violated and spat on any pretended decorum, integrity and sanctity that that body ever might have presumed.