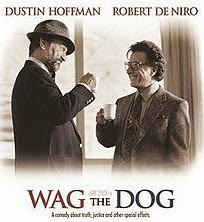 There’s an old adage that says that a dog is smarter than its tail, because if the tail were smarter, it would wag the dog. From that maxim comes the expression “to wag the dog”, which means to create a diversion from some action or event you want to hide by drawing as much attention as possible to something of entirely secondary importance. Illustrative of this type of ruse was a 1997 black comedy called, precisely, Wag the Dog, in which Roberto De Niro plays a top Washington spin-doctor who contracts a Hollywood film producer (Dustin Hoffman) to help him fabricate a fake war in Albania as a means of covering up a White House sex scandal in which the president is caught making illicit advances to an underage “Firefly Girl” (a fictional Girl Scout type organization).

The film created quite a stir upon its release because the real-life dog-wagging that had been taking place in the US capital at the time had managed to span two presidencies and rendered the movie prescient. Although in the original novel by Larry Beinhart the plot obviously had to do with cover-ups in the government of George H.W. Bush and the country’s precipitous entry into its first war in Iraq (Desert Storm), the motion picture’s debut coincided with the emergence of a sex scandal involving Bush’s successor, President Bill Clinton, having to do with his Oval Office liaisons with a 22-year-old White House intern named Monica Lewinsky. More chilling still was the coincidence between the movie’s plot and Clinton’s orders to the military to bomb suspected terrorist strongholds in Africa, just when the scandal was breaking. Although Wag  hasn’t been a very popular movie since then, it got great reviews and Oscar nominations at the time, and—probably thanks to how uncannily on the nose it had been—managed to take in an estimated US$50 million over its US$15 million budget at the box office, despite a relatively short run.﻿


Wagging the Dogo. Here in Argentina, the administration of President Cristina Fernández de Kirchner is no stranger to wagging the dog—or dogo, as it were. This said, however, the president’s smoke-and-mirrors crew can hardly be accused of being original. Since long before Cristina came to office, husband Néstor had already started wagging one big dog in the Argentine public’s face: namely, his former bosom buddy turned archenemy Héctor Magnetto, CEO of the Clarín Group media empire. Reported to have said that he had to “put Magnetto in jail before he puts me in jail,” Kirchner made discrediting Clarín and building public enmity for its media his number one priority and his widow has carried on that tradition following her husband’s untimely death.
But the government’s attacks on Clarín and its heavy-handed attempts to manipulate the law and justice as a means of stripping Magnetto and his media of some of their admittedly awesome power—a portion of which was gained back when the Kirchners and the media mogul were still on friendly terms—has, to an exasperating degree for the president and her crew, backfired, by generating support for the media group from the ever-increasing segment of the population that opposes the Kirchner government and that perceives the anti-Clarín campaign as a blatant attempt to muzzle the press. This attitude has been reflected too in such major exponents of free expression as, among others, the Inter-American Press Association (IAPA), which has issued public opinions criticizing the government for undermining the principle of free expression in Argentina. And it has emerged as well in national justice where, when pushed to “obey orders” from the president, jurists pushed back and reaffirmed their independence as one of the three separate branches of government.
So it is that long-time independent observers of the local media like myself  have looked on with a mix of astonishment, amusement and horror as Clarín—whose apparent editorial policy has long been “the art” of innocuously filling in the holes around the advertising and whose flagship paper, in terms of any genuine coverage of an ineludible reality that it provided, might as well have been absent from Argentina during the entire dictatorship that bathed the country in blood from the mid-seventies to early-eighties—has suddenly been launched to the position of avant gard transgressor and principal opponent to the Kirchner autocracy, and to that of paladin of the free press as well. For anyone who has ever risked anything to ensure that the truth was told to the public in Argentina, the situation can’t help but seem ludicrous, especially when the government’s attacks have extended by association to Clarín’s paper-manufacturing partner, La Nación, which has also garnered a fresh image as a major defender of truth and justice among the anti-Kirchner opposition. This, from a paper, whose publishers, in the past, were, at the very least, the useful idiots of the former military regime and, along with Clarín, mass-circulation suppressors and confounders of truth or any sort of objective reporting about fundamental principles that really mattered. In this process, Kirchner strategists have probably done Clarín’s readers, viewers and listeners in particular a great service, since the group has gone outside of its own rarefied environment to contract some outstanding political commentary talent to help it make its case against the administration: independent journalists with their own bones to pick that just happen to coincide with Magnetto’s desire to chop the floor out from under Cristina, certainly not the least of whom has been brilliant veteran newsman Jorge Lanata. 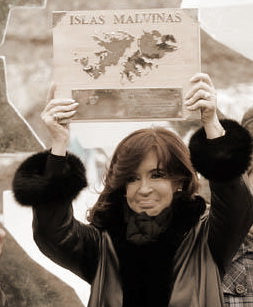 Late this week, Argentina’s embattled Bariloche Municipal Mayor Omar Goye was still insisting he wasn’t going to resign. Nobody was really asking him anymore, in the aftermath of the December 21 riots and lootings that I reported on here last month, but he continued to state it anyway—and to just about anybody who would listen. Most local, provincial and national observers probably realized that his saying this was a sort of affirmation of faith, rather like whistling in the dark to belie his worst fears, because the question most people were asking was when rather than if he would quit, since he has done something that is hard to recover from in the Kirchner Era: ticked off the Queen Bee (or K) herself. And it’s a less forgivable sin still, because he’s not just another party dissident that President Cristina Kirchner is forced to cope with, work around or kick out of the way, but a player within Kirchnerism’s own internal party line, the FPV (Frente Para la Victoria).


Verticality. Peronism was conceived as a vertical organization. If today it often looks like a monster with multiple talking heads (each of which thinks it’s right), that concept still holds at the most basic of levels. And even if, as a party, Peronist Justicialism appears to be an illustration of the old adage about how if you put 50 Argentines in a room together you’ll get 50 different points of view, as a movement, Peronism is all about the tail always following the head. At the top of the Peronist heap, it would appear that Goye is seen as having cut a path of his own, and on top of that, defied a virtual order from the President for him to tender his resignation.

In the end, Goye’s fate would appear clear. It seems the only question is whether he decides to make it easy or hard on himself and his city.
at 9:08 AM 1 comment: Links to this post