HOSTAGES TO THE G20

Argentine President Mauricio Macri was very obviously elated at being the master of ceremonies and center of attention at the start of the G20 summit of major industrialized nations, which this year was being held in Argentina’s capital city on November 30 and December 1. After a decade of isolationism and “bad company” under the populist Kirchner regime that preceded his government, Macri has, in all fairness, bent over backwards to lift Argentina out of its former pariah status on the Western stage, and this G20 meeting is clearly a crowning moment for the country’s president—though not so much for many of his people.
Macri’s first meeting on the opening day of the conference was with US President Donald Trump, slated for 7 a.m. As per Trump’s custom —dramatic planned late entrances—the US president didn’t arrive at Government House from his hotel until 7:23 a.m., thus making a show of his disregard for everyone else’s schedule at a conference attended by practically all major world leaders. He showed further disdain for the host country by only reluctantly accepting an earpiece so that he could hear the simultaneous English interpretation of Macri’s welcoming speech, and only then merely holding it up to one ear instead of putting it on. When Macri had finished speaking, Trump said, “I think I understood you better in your language than I did on this, but that’s OK,” and then tossed the earpiece to the floor.
Macri made reference to the long relationship that his own multi-millionaire family has had with billionaire Trump and his family for decades. Trump, meanwhile, recalled how he had told the Argentine president’s father, businessman Franco Macri, that he was sure Mauricio would one day be president and congratulated himself for making the right call.
Macri said, “...It took us 30 years to convince you to come, Donald...We had to wait for you to become president and for me to become president to manage it, but we Argentines are really very happy to have you here in our country.”

Clearly, there are many Argentines who would beg to differ.

As in many other parts of the world, Trump is a less than popular figure here among a very large segment of the population. He is often seen as a bully, when not as a buffoon, and as a danger in his role as the most powerful leader on earth, due to his America First (America alone) policy, his contempt for traditional US allies, his unpredictable and often belligerent foreign policies, his fostering of a worldwide trade war and his disregard for the basic tenets of democracy and for the science behind efforts to rein in global climate change. Add to that Argentina’s previous negative experiences with the IMF (International Monetary Fund) and foreign business and banking under the former military regime (1976-1983) and under the 10-year reign of elected President Carlos Saúl Menem (1989-1999), as well as the extraordinary and massively disruptive security efforts surrounding the G20 summit itself, and the mood among a major portion of the population is anything but positive surrounding either Trump’s visit or the summit as such.

Security for the two-day summit alone will cost Argentine taxpayers an approximate 43 million dollars at a time when adherence to IMF guidelines is imposing a cruel austerity program on the population at large. Since taking office, Macri has also scrapped former subsidies on basic services such as privatized electric power, natural gas, water and sewage, etc., causing utilities to skyrocket, while permitting concession-holders to pretty much dictate their own prices. A free-floating exchange rate and free-market price policy has significantly raised retail prices for basic necessities in dollar terms, while, additionally, new and increasingly onerous taxes have been imposed on a population already stretched thin, while pay increases and social security are being severely restrained by the Macri administration. 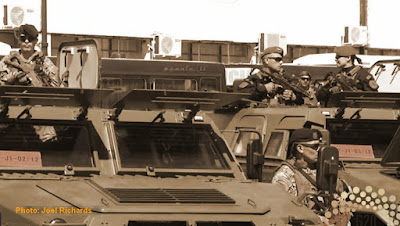 Ramped-up security for the summit has prompted a veritable shutdown of the entire country. Mobility has been so severely restricted for the Friday and Saturday summit that the government saw fit to declare an extraordinary national holiday on Friday, and there has been a nationwide shutdown of domestic air services. Long-distance bus services have also been suspended, as have subway and train services for Buenos Aires and the Greater Buenos Aires area and maritime services in the Port of Buenos Aires. Local bus services were being maintained on a restricted basis. In short, Buenos Aires and indeed much of the country as a whole were being held hostage by the G20.

A vast number of Argentines tend to tremble whenever world leaders get together with their own government to decide their fate. This is not surprising, considering the country's checkered foreign policy and economic  history. Many tend to figure that any time world leaders gather behind closed doors, the purpose will be to figure out how to divide up the world’s wealth, power and resources, and that, in the end, the common people will always lose. Judging from their own experience, the people of Argentina may very well have a point.

With regard to how certain local experts view Argentina’s hosting of the G20 summit, the opposition newspaper Página 12 asked Juan Gabriel Tokatlian, professor of international relations at Argentina’s Universidad Di Tella, to provide an opinion on what the benefit to Argentina would be of hosting the G20 here and of subordinating its foreign policy to the whims of Washington.
“The Government is composed of an elite that believes that some of the Menem administration’s recipes worked,” Tokatlian told the daily. “But (Macri) doesn’t know the level of financialization that has taken place in the world and that it’s not possible to go back to the '90s. That world doesn’t exist anymore.”
According to the Universidad Di Tella professor, “They (the Macri government) are not intellectually sophisticated. They have a logic of interrelationship between the political world and the economic world more typical of the '90s, which doesn’t exist today within the domestic internal dynamics of the United States. So they opt for the third way, which is to believe that security issues are going to be what will open other economic doors. Then they look for the path to see how to get the Southern Command into to the DEA, into the FBI. This shows ignorance.”
Tokatlian went on to say that, “in addition to their ignorance, they have a very optimistic view of the world, of globalization, of the free market, of the flow of investments, of the attraction posed by the arrival of a government different from (the earlier) Argentina and of the end of what they call populism. When optimism meets ignorance, the balance is a catastrophic cocktail.” The fear, he said, was that Argentina would overreact. “Then,” he said, “we go from ignorance and optimism to naivety and to voluntarism. That is a very bad reading of the United States.” 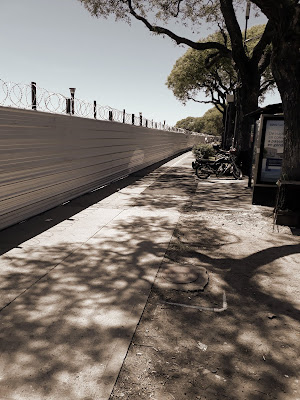 Macri got a taste of this new, non-'90s realpolitik on the first day of the summit when Trump laid down a new rule. Basically, you're either with China or with the US. There's no in between.
Last Sunday, I arrived back in Argentina after almost a month away in my native United States. I had nearly five hours to kill in the Jorge Newbery metropolitan airport before catching my domestic flight to Patagonia. After checking my bag, I decided to cross the street in front of the airport to walk a while along the beautiful coast of the River Plate. But instead of the usually lovely view I found blocks and blocks of what looked like a miniature replica of Donald Trump’s ´proposed border wall—solid sheet metal nine feet tall, topped by endless coils of razor wire. At first I couldn’t imagine why this romantic and iconic Buenos Aires attraction had been so monstrously violated. And then I realized that this was the ugly face of the upcoming G20 meeting. 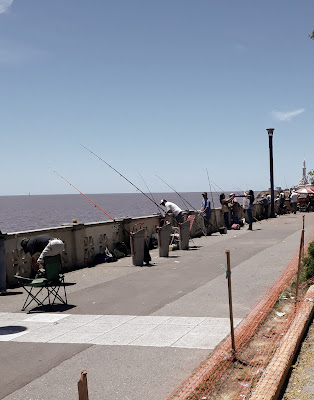 Disheartened, I walked along the barrier dragging my carry-on behind me, unable to get even a glimpse of the miles-wide, lion-colored waters of the River Plate until, abruptly, passing the main security area of the airport, the wall ended and a familiar and welcome sight unfolded: the inveterate anglers who daily fish the waters of their city’s river from the sidewalk behind the flood wall. This was where they had all re-grouped, squeezed up the coastline by the aggressive new barrier, but undeterred from their beloved enterprise. There was the lady who sold bait, coffee, sandwiches and churros. There too was the food wagon that sold sausages, hamburgers, fries and drinks. And then the fishermen themselves, with their rods lined up along the flood wall, enjoying what had turned out to be a truly fine spring day. It was passive resistance, a reminder that the coastline was a long one and that the government wasn't going to be able to fence them out of all of it.
I found a place to sit and watch them for a while, and as I did, I had to smile. The razor wire and security wall would always represent the unassailable power of the rich over the common people. But the anglers represented the simple truth that people adapt and find a way to work around the government, no matter what gets thrown at them. Life goes on, governments and policies change. The only thing that was constant, I realized, was this, people in the pursuit of happiness...against all odds.