THE BEFORE AND AFTER OF A 'HAVING IT ALL' REGIME


Authentic democracy filled the streets of major cities all over Argentina on the evening of Thursday, April 18, while tyranny stalked the halls of the national Executive, Legislative and Judicial powers. The A18 protest was, like its 8N predecessor, a spontaneous civic demonstration organized from computer to computer through the social media and without partisan links. A number of opposition politicians respectfully joined the protesters but from the uncomfortable low-profile position of tolerated guests rather than organizers, since demonstrators have made it abundantly clear ever since the first of three progressively stronger protests less than a year ago that they are as disappointed with the lukewarm opposition as they are furious with the rabidly self-absorbed ruling political movement.
In an outpouring of genuine democratic zeal, millions of people of all political colors poured into the country’s streets—over a million participating protesters in the nation’s capital alone—to reject what their supposed political representatives were ostensibly doing in their name and in the name of “democratization”: seeking to introduce “reforms” that would give an already autocratic Executive Branch even greater discretionary power, to the detriment of the Judiciary, the rule of law, the rights of the individual and those of the “fourth power” (the media and their role as the guardians of free expression in representation of the people). But that wasn’t all—as if that were not enough—that the hundreds of thousands who took to the streets were protesting. They were also decrying encroaching corruption that, in the last decade, has become so shockingly flagrant that it can no longer be hidden from view. In that sense, the revelations aired the previous Sunday night—and that continued last night—by investigative
﻿
broadcast journalist Jorge Lanata proved a major catalyst for the 18A protests and clearly marked a “before and after” in terms of any doubts anyone might have had about links between blatant criminal activities and the powers that be.


If opposition politicians were relegated to a secondary role in the A18 event, however, they were indeed showing greater activism than usual with regard to the “reforms” that a now embattled administration was seeking to ram through its rubber-stamp majority in Congress with the pace and power of an express train. Two days before the mass protest, members of opposition political movements gathered before court buildings in Buenos Aires to protest the government-sponsored judicial “reform” bills, by holding up a sky-blue and white national banner bearing the inscription “Sin justicia, no hay futuro” (without justice, there is no future)—a noble thought and slogan, but not strictly true. Without Justice there could indeed be a future for a despotic government bent on ruling in perpetuity and on protecting its circle of influences—just not for democracy, representative governance or civil rights. 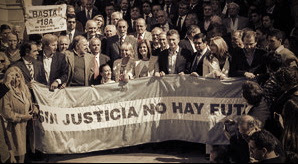 
A little over a year ago, on February 27, 2012, at a rally in Rosario commemorating the two hundredth anniversary of the first raising of the Argentine flag, Cristina Kirchner stated, in a nutshell, the essence of her government’s plan: “Vamos por todo...¡por todo!” (“We’re going for it all...for all of it!”) she shouted, gesticulating to a clump of her FPV (Frente para la Victoria) political movement gathered in the crowd before the reviewing stand in Argentina’s third largest city. It wasn’t part of her own speech. It was, instead, a sort of battle cry that she issued, without a microphone, in the middle of Socialist Mayor Mónica Fein’s speech, obviously startling the mayor, as the president’s fans drowned Fein out with their shouts of approval for their jefa’s words and gestures. It was a show of power and disrespect. It was Cristina trying to demonstrate to the mayor that she, not Fein, owned the street, that even if Fein was at the mike, the crowd belonged to the Kirchner regime and so did the country—but in ways that clearly have had little to do with democracy or constitutional administration.
As political news commentator Joaquín Morales Solá pointed out this past week, Jorge Lanata’s investigation has brought to the fore what everybody in politics and serious journalism already knew: basically, that Argentina currently reeks of corruption as it never has before—which, after the era of Carlos Menem in the nineties, is saying a mouthful—and that the deeper meaning of “going for it all” carries with it a barely veiled and underlying threat and project of perpetuity in government, the creation of a popular dictatorship capable of protecting the burgeoning Kirchner estate and its friends and partners in power.


As Morales Solá tangentially points out, Lanata’s investigation has been a mere catalyst, a wake-up call, a way of whacking people—including a somnolent opposition—over the head with what, in voluntary blindness, they’ve been tripping over on a daily basis for the past ten years. If most people living in Argentina were honest with themselves, they would have to admit that they have long since seen the signs of advancing tyranny and crippling corruption within the power structures that are seeking to control every aspect of life in this country. But why did it take the unique head-on style of a Jorge Lanata to wake people from their lethargy even as their democracy, their freedom and their well-being are being wrested from their hands? The late Argentine physician and world-renowned heart specialist René Favaloro once said, “After so often seeing incompetence triumph and dishonor prosper, after so often seeing injustice grow, after so often seeing power in the hands of bad people burgeon, Man eventually becomes disheartened with virtue, laughs at honor, and is embarrassed to be honest.” Perhaps the answer to my question lies within this wise man’s simple yet crystal-clear observation.
Some people still cling to the idea that Néstor and Cristina Kirchner’s original plan of passing the presidency back and forth between them ad infinitum died along with the late former president, and they cling as well to the hope that the presidential elections of 2015 will no longer contain a Kirchner as a candidate, since it is—currently at least—unconstitutional for any president to serve three consecutive terms. But astute and highly respected political analyst Nelson Castro said it all when he reminded the country this past week that for Cristina Kirchner and her entourage, “a ‘re-reelection’ is a matter of life and death.” Clearly, without a means of retaining their hold on power and the judicial immunity that goes with it, the President and her entourage would become common (if vastly wealthy) citizens, who could be called upon to answer for all charges and allegations against them.
The latest advances by the President and her rubber stamp majority in the Senate against the necessary checks and balances of any truly democratic society should have left no doubt in anyone’s mind about their intention to “go for all of it” by also controlling the Judiciary and thus sealing their future impunity. And if they manage to get away with it by also carrying the Lower House of Congress, then there should also be no doubt about what their next move will be: a rubber stamp constitutional “reform” aimed at “legalizing” the President’s illegitimate, totalitarian ambitions and perpetuating her administration in power.