THE MUELLER REPORT—AS I SEE IT


During the highly divisive debate over the past two years to which the Department of Justice investigation into presidential abuse of power, obstruction of justice and conspiracy with a hostile foreign power has given rise, moderates on both sides have cautioned their more radical peers to stop trying to second-guess Special Counsel Robert Mueller and wait for his report. Wait, we have, but the release of the report this week holds out no promise of an end to the discussion. On the contrary, it opens up new questions on which defenders of the two juxtaposed positions regarding the latest US administration are bound to bitterly clash. 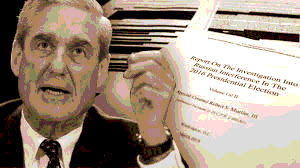 When then-Attorney General Jeff Sessions told Donald Trump in May of 2017 that prosecutor Robert Mueller was being appointed by the DOJ to look into allegations of obstruction and collusion, the president is reported to have said, “This is terrible. This is the end my presidency. I’m fucked!” The best one could surmise about such statements is that the president might have been unwarrantedly paranoid about the legal process within the US justice system—considering his unfamiliarity with the Constitution, Federal law or the truth. But it would appear, rather, that Trump was genuinely worried about how exposed he was to such an investigation because there really was a “there there” under these headings.