As I was listening to excerpts from President Trump’s rally speech given in Wheeling, West Virginia, in which he professed his love for Kim Jong-un, I was trying to imagine if former President Barack Obama had said something similar about a ruthless dictator.
I’m referring to Trump’s outrageous hyperbole regarding his “falling in love” with the North Korean dictator. What Trump said, specifically, was, “We are doing great. That was a big, big problem. I was really being tough and so was he, and we would go back and forth. And then we fell in love. No, really. He wrote me beautiful letters.” 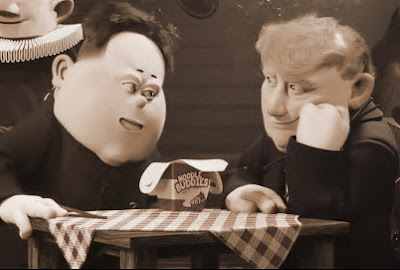 You could feel everyone catch their breath for an instant before they started to laugh. It was a joke...Wasn’t it?
That’s when I tried to imagine what the reaction would have been in West Virginia (or Ohio, or Alabama, or Kentucky, or any number of other states that encompass unshakable bastions of Trumpism) had President Obama said the same thing about some anti-US dictator—any anti-US dictator! Like, what if he’d said it about the ayatollahs of Iran, jocularity notwithstanding, while his administration was negotiating the Iran anti-nuclear accord? He would have been crucified. In Washington, the GOP (not particularly known for its sense of humor) would have gone bat-shit crazy. They might even have sought to impeach Obama for consorting with the enemy, even if he’d said—like many are saying about Trump’s statement—that it was a clearly a joke. 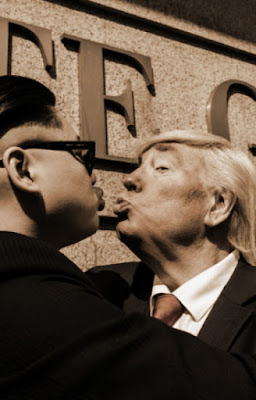 Joke or not, Trump’s loving embrace of Kim has serious implications. First, it can’t be taken as anything but a tacit endorsement of the North Korean regime. It places Kim on a one-on-one footing with the president of the United States, and thus weakens the US negotiating position, since while Washington has done much to make overtures toward the North Korean dictator, Kim has conceded little in return. There is no evidence that he has substantially, if at all, reduced his country’s nuclear capabilities and thus, the only real concession he has made has been to temporarily halt nuclear arms and intercontinental ballistic missile testing.
Second, Trump’s full personal acceptance of Kim sends a signal to South Korea that it should push ahead with its bilateral peace efforts with the Kim regime. While lasting peace on the Korean Peninsula should surely be a principal goal, it should only be consummated by means of bilateral concessions, not, as appears to be the intention of South Korean leader Moon Jae-in, by easing security and encouraging the US to do the same, without any mutual measures being taken by Kim. 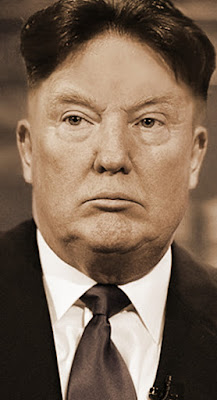 Third, and perhaps most importantly, Trump’s slobbering love affair with Kim Jong-un sends a dangerous message to other despots worldwide. Kim is one of the worst dictators on earth (despite Trump’s apparent affection for him) and he has inherited his well-deserved reputation as such from two generations of the brutal Kim dynasty that preceded him. Among other crimes, he has reportedly ordered the murders of around 160 members of the government who didn’t agree with him or whom he saw as potential traitors. He has also eliminated his half-brother in a scandalous attack on foreign soil. But worse still, he has continued the policy of his forebears of maintaining gulag-like work camps that are reported to be worse than Nazi concentration camps. Some 130,000 citizens populate these camps, many for such arbitrary “crimes” as “gossiping against the State.”
A recent International Bar Association report charges that “there is sufficient evidence to establish that perpetrators ranging from Kim Jong-un to lower-level prison guards (have) perpetrated, and continue to perpetrate, crimes against humanity in North Korean political prison camps.” The report describes atrocities about which North Korean defectors have testified, including, among many others, “a prisoner's newborn baby being fed to guard dogs, the execution of starving prisoners caught digging for edible plants on the mountainside, and a variety of violent measures designed to induce abortions, including injecting motor oil into women's wombs.”

This is the monster with whom the US president has “fallen in love”. Nor is it the first time that Trump has expressed admiration for what he considers the winning virtues of ruthless dictators.
During his campaign for president he touted Russian strongman Vladimir Putin as a better leader than US President Barack Obama and he has continued his love affair with Putin up to the present day.
When he met Philippines dictator Rodrigo Duterte, he told the Filipino leader that he “just wanted to congratulate” him because he had heard that Duterte was doing an “unbelievable job on the drug problem.” It should be noted that Duterte’s way of dealing with the drug problem was the extrajudicial killings of drug dealers and addicts alike.
Trump said he was giving “very high marks” as well to Turkish autocrat Recep Tayyip Erdogan. He said it at a time when Erdogan was cracking down on the press, on his political opponents and on civil society as a whole, while diminishing to an ever greater extent what had once been a democratic system in Turkey.
The US president has also praised Egyptian President Abdel Fattah el-Sisi, saying el-Sisi was “doing a fantastic job in a difficult situation” and lending him full US support. Field Marshal Sisi seized power in a 2013 coup d’etat that toppled Egypt’s first democratically-elected administration. His government has been criticized worldwide for suppression of civil liberties and for human rights violations. According to Human Rights Watch, el-Sisi has “maintained a zero-tolerance policy towards dissent” and provided “near-absolute impunity for abuses by security forces under the pretext of fighting terrorism.”
There was a time when the US, even under its most authority-prone presidents, encouraged some form of democratic process in any country that wanted to consider itself our ally. Those days, at least for now, are over. Donald Trump praises despots shamelessly, probably because he himself has no love for the democratic process or rule of law. Or at least if he does, he’s keeping it a coveted state secret.
This kind of acceptance of truly evil despots undermines the image of the United States abroad in two ways: First, it clearly separates us from other Western nations that were our staunchest allies before the Trump regime came to power, and that still strongly believe in the tenets of democracy and rule of law. And second, it provides a signal to dictators and autocrats worldwide that the US under Trump will give them a pass and maybe even legitimize them by praising them to the heavens, as long as they can flatter their way—whether by “love letters” or other means—into the current president’s good graces.