Argentina this past week marked the first anniversary of the Plaza Once Rail Tragedy. I’ve placed this case title in caps because I think it deserves them. And the reader will note that I’ve used the word Tragedy, rather than “accident”, since while there may have been nothing premeditatedly intentional about it, there can be little doubt that what happened in the Plaza Once railway station in Buenos Aires on February 22, 2012, was not the result of an accident, a quirk of fate, a momentary lapse in human concentration or an isolated error in judgment. It would appear ever more clear, rather, that this horrifying train wreck was the outcome of long years of incompetence, negligence, indifference and worse, that inexorably culminated in the deaths of 51 passengers and the injury of more than 700 others. If the Once Rail Tragedy could ever be referred to as an “accident” it could only be within the context of “an accident-waiting-to-happen”.

It is also hard to separate that tragedy from a general attitude of indifference on the part of the current national government with regard to its invested responsibilities as the country’s elected administration and its accountability for the well-being of the country, its economy, its currency, its world image, its infrastructure and, ultimately, its people.  In this sense, the Plaza Once Rail Tragedy might well be seen as a symbol of the chronic and unwarranted deterioration to which Argentina has been subject in the past decade and, particularly, in the last half of that period. 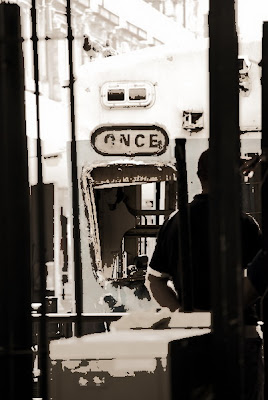 The Tragedy. The wreck took place on a Wednesday morning at about 8:30, on the Sarmiento western commuter line, when the train, operated by concession-holder TBA (Trenes de Buenos Aires), was loaded with some 1200 rush-hour commuters. As the train came into the Once de Septiembre Station (better known simply as Once) on track No. 2, it slowed to a reported per hour, but was then unable to brake and crashed into shock absorbers at the end of the track beneath the station platform. The impact was such that it sounded to many passengers and passersby like an explosion, and the lead car telescoped into the one behind it. These two cars were even more packed with workers coming into the city from the western suburbs than the rest of the train, since morning commuters tend to favor the cars up front so as to save time by getting off and out of the station quickly, ahead of the rush.
There was an immediate attempt by the firm and the government to blame the gory incident on “human error”, claiming that the commuter train’s driver was at fault. But although this may briefly have led the early investigation off on a tangent, rail workers were quick to come to their companion’s aid and tell the press and anyone else who would listen to them about the deplorable safety conditions under which they were working and the general disrepair of TBA’s rolling stock.
It was the third worst crash in the long history of Argentina’s railways, and it was the very worst in more than three decades.

Jaime and Schiavi. Successive charges that have been leveled against former Transport Secretary Jaime would appear to provide an inkling of a response. He came to national office in 2003 when Néstor Kirchner was elected president. He remained in that post under Cristina Kirchner’s administration until 2009, when his name had become so connected with scandal that he was forced to resign. He has had numerous court actions filed against him and has been variously accused of charges ranging from contempt of court to alleged kickbacks and from failing to comply with the duties of a public official, to alleged involvement in a money-laundering cover-up and abuse of office. ﻿﻿

Over the course of the past week or so, scores of headlines in the Argentine media have been devoted to what the Kirchner government has rather grandly called the “Commission for Truth”, the outgrowth of a deal cut between the administration and the unitary, theocratic government of President Mahmoud Ahmadinejad in Iran. There are numerous ins and outs to the accord but the basic idea is that the Kirchner government has surrendered to the flat refusal by Ahmadinejad and his predecessors to honor any of Argentina’s extradition requests to bring the alleged perpetrators of the 1994 Islamic terrorist bombing of the AMIA Jewish mutual association in Buenos Aires to Argentina for questioning and possible trial, by agreeing, instead, to send a judicial commission to Iran to question suspects there.

﻿﻿ The Crime.  On July 18, massive explosion reduced the headquarters of the Asociación Mutual Israelita Argentina (AMIA) in mid-town Buenos Aires to rubble. The explosion was the result of the detonation of a terrorist bomb set in front of the AMIA building. So powerful was the blast and the damage done that investigators have yet to determine without a doubt, after nearly two decades, whether the approximately (more than ) of explosives were packed into a van parked directly in front of the targeted building, into a dumpster that had been left in front of a building under construction across the street, or both. But in subsequent investigations carried out by the FBI and the Mossad (Israel’s secret service) it has been established, almost without a doubt, that the suicide trigger man for the blast was Ibrahim Hussein Berro, a 29-year-old Hezbollah militant, who probably used a remote control device from the van to detonate the explosives. (The identification was made on the basis of witness testimony and migration data from the triple border crossing that Argentina shares with Brazil and Paraguay, where the terrorist is thought to have entered the country, since local investigators are alleged to have “lost” a human head found on the blast scene that very likely belonged to Hussein Berro, and that could otherwise have been used for DNA testing). The massive blast not only caused the total destruction of the five-storey AMIA headquarters, but also demolished buildings all around it, causing severe damage to an estimated one thousand apartments, businesses and offices in the immediate area and breaking windows in other buildings within a six-block radius. It was the worst bombing in Argentine history and is ranked among some of the worst radical Islamic terrorist attacks in the world.

The suicide bombing was obviously timed to do the greatest human damage possible, with the explosives going off at approximately .m., in the busy mid-town district.  Eighty-five people perished on the scene and another 300 were injured, many seriously. At least 18 of the fatalities were passersby and people from other buildings. The attack came only two years after another bombing by Islamic extremists in Buenos Aires, that time perpetrated against the Israeli Embassy, on the north side of the downtown area. That bomb attack destroyed the embassy building, killing 29 people and injuring approximately 250 others.
The Probe. The investigation of both Islamic terrorist attacks on the Jewish community in Argentina—at about 250,000 people, the largest in Latin America and the seventh largest in the world—was plagued from the outset by intrigues, disconnects and cover-ups. Indeed, neither ever led to a single conclusive conviction.
The worst by far, however, was the probe into the AMIA bombing.  Early work by detectives with the apparently impossible-to-avoid help of both US and Israeli agents quickly led to the conclusion that such a major terrorist attack never could have been pulled off without local collaboration. But the investigation began to stall when it pointed to the possible collusion of several Buenos Aires Province police officers and of a lawyer turned used car salesman called Carlos Telleldín who was alleged to have provided the Renault Trafic van that the suicide bomber used in the attack. Investigation of the AMIA case was handed over to Federal District Court Judge Juan José Galeano. The former attorney had been appointed to the federal court the previous year, allegedly with a behind-the-scenes nod from Hugo Anzorreguy, who headed up the Argentine Intelligence Bureau (SIDE) under the presidency of Carlos Saúl Menem (1989-1999).
Early on, the case hinged on Telleldín, the inconsistency of whose testimony made his level of involvement and reliability difficult to gauge but who linked police to the case, saying that he had been pressed into providing the van by former Buenos Aires Provincial Police Captain Juan José Ribelli. Ribelli, several other police officers and Telleldín were all ordered held by the judge, but the case itself languished in Galeano’s court. And finally, in September of 2004, the judge handed down a decision absolving all detainees in the case.
But the following year, hidden-camera footage was released on national television that implicated the judge in payment of a US$400,000 bribe to Telleldín (who was in jail for ten years while the court dragged its feet without convicting him) to change his testimony. The judge tried to resign in order to avoid trial, but his resignation was “neither accepted nor rejected” by the administration of then-President Néstor Kirchner, clearing the way for Galeano to be impeached and removed from his post in disgrace by a nine-judge jury of his peers. In addition to bribery, the impeachment proceedings accused Galeano, among other things, of destroying and/or tampering with evidence (such as a document identifying the engine-block number of the vehicle used in the bombing and which allegedly linked Telleldín to the case) and manipulating witness testimony.
But by then, subsequent probes and Galeano’s own testimony in the impeachment proceedings had involved SIDE chief Anzorreguy in the bribery scandal and, called upon to answer the charges, Anzorreguy (released from his secrecy vows by Néstor Kirchner, who called the failed AMIA investigation “a national disgrace”), quickly pointed an accusing finger at his former boss, ex-President Carlos Menem, who, he said, had authorized the bribe.
In late 2006, the subsequent Argentine prosecutors in the case, Marcelo Martínez Burgos and Alberto Nisman, who had centered part of their investigation on an Iranian connection, formally charged the government of Iran with directing the attack and accused the Hezbollah militia of carrying it out. The theory behind the prosecutors’ probe would appear to link the AMIA bombing to a much more far-reaching issue than a random terrorist attack. If they were correct, the bombing was a kind of warning to the Menem government after a decision by Buenos Aires to at least temporarily suspend the promised transfer of nuclear technology to the Iranians. While this hypothesis has been much debated, it would certainly appear to be in line with what is now the very clear intention of Iran’s radical leadership to gain access by any and all means to ever greater nuclear technology and material, so as to eventually achieve atomic warhead-manufacturing capability. However, Menem himself—whose family has long been prominent in the Argentine-Arab Community—has advanced the theory that the bombing was a vendetta for his support of the United States in the first Gulf War (Desert Storm) against Iraq.