NO REQUIEM FOR A NAZI

On the mountain road that leads to my house, 20 clicks from Bariloche, where Erich Priebke not only lived under his own name for half a century following World War II but was also a well-known and highly respected businessman and community leader, there’s a sheet metal plate bearing his name on the post of an electrical transformer. There are actually two transformers on that road. The other one bears the name of another pioneer neighbor and architect, Raúl Bozzarelli. It was the practice of the local electrical cooperative, way back when, to identify the transformers for new areas of service by the surname of the first settler to request it, mainly because in order to have electricity, whoever arrived first had to pay for the installation of the transformer. Accordingly, if the lines are down and you call in for a maintenance crew to be sent out, even today, what the co-op will want to know is if your sector is Bozzarelli or Priebke.


Born in Berlin in 1913, Erich Priebke died earlier this month (October 11), at the age of one hundred. He had been under house arrest (because of his extremely advanced age) in Rome since his conviction in 1996 for his part in the Ardeatine Caves Massacre.
The facts are historically simple if morally complex.  Priebke was a 31-year-old captain in the SS police force, stationed in Rome under the orders of German Commander Herbert Kappler. It was in the latter part of the war, in March of 1944, that Italian Resistance fighters attached to the Gruppi di Azione Partigiana (GAP) attacked a column of SS Military Police troops marching along Rome’s Via Rasella, killing 33 German soldiers by first setting off a bomb near the detachment and then attacking the group with small arms fire and hand grenades.
Although never documented, Commander Kappler is alleged to have received direct orders from the Führer himself to execute ten imprisoned Italian anti-Nazis for every soldier to die as a result of the attack. It was Kappler who compiled the list of 330 people whom the Reich condemned to die in the Ardeatine Caves.

Major Karl Haas (who was an SS Intelligence officer with a well-established reputation for ruthlessness that included sending hundreds of Jews from the region to Auschwitz) and Captain Priebke were placed in charge of rounding the prisoners up. Priebke was specifically charged with checking the list. And although the Italian courts that tried him, in principle, tended to agree that he had been a staff-grade officer following orders, his responsibility for the list and his own participation were what eventually condemned him. During the trial it was established that while the order was to kill ten Italian Partisans for each of the 33 German soldiers killed in the Resistance raid, the number of people killed in the Ardeatine Caves was 335, not 330—with five people not on Kappler’s list having been added by mistake. Furthermore, Priebke admitted to having executed two of the prisoners himself, as did Haas.
﻿
Both Priebke and Haas were captured by the Allies following the war. Interestingly enough, however, while Priebke was held in a British prison camp to be bound over for a war crimes trial for his part in the Ardeatine slayings, Haas went from being a POW to allegedly going to work for US intelligence as a spy against the Soviet Union. Priebke ultimately escaped from the prison camp and, after some time in hiding, in South Tyrol, eventually received help from Bishop Alois Hudal at the Vatican, who reportedly aided him in obtaining false documentation and finding a new home in Argentina. There he would live under his own name for half a century until the team of TV reporter Sam Donaldson of the ABC network in the United States stumbled onto a less than successful clearance table book in which Priebke was described as one of the architects of the Ardeatine Massacre and decided to follow up on the lead, which took them to Bariloche.
Largely unrepentant and always believing that he had only acted on orders and that the people executed at the Ardeatine Caves were, at the time, “terrorists”, Priebke naïvely felt that enough time had passed that he could talk about the incident and gave Donaldson an interview. Once aired on US television, the interview sparked outrage in Italy and the backlash led to Priebke’s arrest and extradition. Curiously enough, former Major Haas was called as a mere witness for Priebke’s trial. But as a result of his testimony, he eventually also ended up being charged and tried, and died under house arrest in a rest home near Rome at age 92.
* * *


There can be little doubt that Erich Priebke, not a boy but a mature man of 31 at the time of the war, was a thoroughly committed SS officer and he played a key role in the organization of one of the most heinous Nazi war crimes of World War II. Nor can there be any doubt that, in trying him for his part in the Ardeatine Caves Massacre, Italy was doing long-delayed justice for a terrible atrocity. 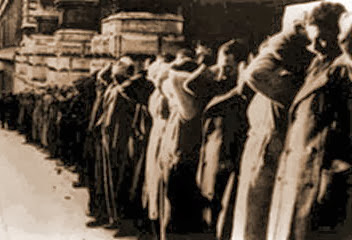 But where justice would appear to have turned to vengeance was when Priebke died this month. The Vatican (perhaps as damage control for the role of one of its own number in Priebke’s escape and exile) reportedly issued an unprecedented ban on his funeral’s being held anywhere in Rome. Priebke’s own native city also refused his body, fearing his tomb might become a pilgrimage site for neo-Nazis. In the end, his funeral was eventually arranged—not without violent protests—by a Catholic splinter, the Society of Saint Pius X—a group alleged to have Fascist and anti-Semitic sympathies. Their plan was to inter the former Nazi in the Italian city of Albano Laziale. Since protesters kept the body from being buried there, it was eventually decided that Priebke's remains would be laid to rest in an undisclosed location.
But the cruelest cut of all, I feel, was Argentina’s refusal to repatriate Erich Priebke’s body. His last wish had been to be laid to rest next to his wife in the country that he had called home for half a century after the war. Despite the fact that the founder of the current ruling party, General Juan Domingo Perón, was clearly the key to the immigration of fleeing former Nazis in the post-war years, and although the Peronist government of Carlos Menem that preceded the current Peronist-led administration upheld the concept of “due obedience” that kept members of Argentina’s former military regime from being tried for human rights violations and murder until the current Peronist administration overturned that amnesty, the administration of Cristina Kirchner felt perfectly justified in turning down the Priebke family’s request that they be permitted to bring his remains home. Considering that congressional elections (where ruling FPV candidates aren’t expected to do well) are to be held in this country next Sunday, and that the current administration has blatantly used its early human rights stand to cover up abuses of power of every color ever since, not accepting the return of Priebke’s body seemed hypocritical at best and like political grandstanding at worst. What part could his family possibly have had, I asked myself, in the cruel and misguided decisions and choices that a young army officer made nearly 70 years ago? Didn’t the sentence against Priebke end with his death and shouldn’t his family have the right to mourn and bury him?
I was immediately reminded of Gabriel García Márquez’s novel, Hojarasca (Leaf Storm), in which a fallen physician’s perceived sins against the town where he once practiced lead him to live the life of a recluse, locked away in his home, and to eventually commit suicide. But even then, the townspeople refuse to forget his misdeeds, and ban anyone from burying him. So great is their hatred that they say there will be no burial for the man “until they can smell his corpse rotting in his house from the other side of the street.”
In the story that García Márquez tells, the moral conundrum has to do, precisely, with when “enough is enough”, when blind justice turns to blind vengeance, and when the actions of a “just” society turn nearly as hateful as the sentiments behind the crimes they condemn.
To my mind those are questions that emerged this month too from the refusal of the countries of his birth and choice to afford Erich Priebke a proper Christian burial in the presence of his family, no matter what crimes he was convicted of and sentenced for in life. And perhaps another question that this begs is how much more we know of compassion in dealing with his family and his death than Priebke himself did in making at least one major decision of his life.
at 12:22 PM 8 comments: Links to this post