This past weekend, the Republican Party leadership and the vast majority of its politicians decided where they stood. Would they defend the party’s traditions of conservatism, American unity, law and order and liberal democracy, or would they underscore still further the party’s vertiginous downward spiral into the sordid depths of populism, personality cultism, vigilante violence and mob rule over the will of the majority and over the rule of law? In the end—and, unfortunately, surprising to no one—they chose the latter. 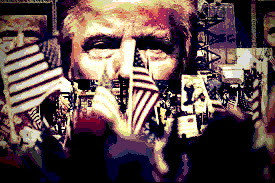 Earlier in the week, GOP senators (ad hoc jurors in the second impeachment trial of ex-President Donald J. Trump), like their Democratic colleagues, heard the cogent and well-researched presentation of congressional impeachment managers laying out the case against Trump on the charge of inciting insurrection against the United States of America. Their case was illustrated by all too familiar video footage of the former president’s rabble-rousing speech given on the Ellipse near the White House on January 6th and of the frenzied mob then following Trump’s instructions to go to the Capitol, where its members proceeded to clash violently with police and to enter the building by force, vandalizing the hallowed halls of Congress and searching for narrowly evacuated members of the congressional opposition, as well as dissenting members of the GOP (including Vice-President Mike Pence) whom they were promising to lynch.

But the presentation also included a great deal of new, formerly undisclosed footage that proved graphically violent and from which a number of members of Congress turned their eyes away—some because it was too painful for them to watch, but others because they were seeking, cynically, to demonstrate that they had nothing to do with this process and considered it politics as usual in the era of Trump. It didn’t matter to them that part of what they were watching was the brutal mob-murder of Capitol Police Officer Brian Sicknick, or the desperate bravery of Officer Eugene Goodman who, armed only with a billy club, stood off dozens of insurrectionists, making himself their target, until his colleagues could seal the Senate chamber and until he could taunt the rioters up the stairs to where police backup was waiting. It didn’t matter that they were seeing the violation of the congressional inner sanctum, the Executive-inspired terrorist raiding of another co-equal branch of government, the subversion of democracy by the followers of a president sworn to defend it. It didn’t matter that they, as members of the so-called “party of law and order” were watching how seditious thugs clubbed, mauled, abused and injured more than one hundred forty guardians of the Capitol in order to try and stop the democratic process by force and to maintain a would-be tyrant in power. 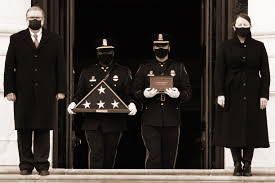 Their minds were made up before the trial ever began, despite swearing an oath to be impartial jurors, to say nothing of their standing oath to support and defend the Constitution of the United
States of America. They saw what everybody else saw. A national tragedy, unique in the two and a half century-history of the United States. But they simply didn’t care. They put party over country and personality cult over party. They were willing to let democracy and the nation lose in the tenuous hope that they themselves wouldn’t when it came time for the most radical and extreme of the former president’s base to vote in a future election. 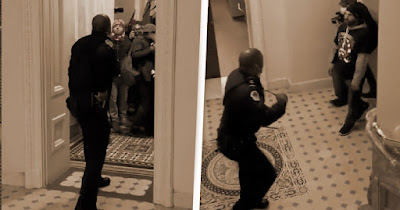 Ignoring the evidence, which most top Republicans admitted was compelling, when it came time to stand up and be counted in defense of democracy, the rule of law and the Constitution of the United States, the GOP leadership caved. It claimed there was a technicality that kept the GOP from doing anything but voting to acquit. That technicality consisted basically of the fact that Donald Trump was no longer president and the Senate was, then, supposedly no longer competent to try him. And the GOP leadership continued to maintain this fallacious argument despite repeated statements from experts in constitutional law that it simply wasn’t true, and that there was even at least one historical precedent to prove that it wasn’t. Nor was it upheld by the House of Representatives, which is, according to the Constitution, the sole authority for setting the rules for an impeachment process.

And then the GOP punted. They couldn’t do anything, they claimed, but there were other competent authorities who could, and they would leave the matter in the capable hands of federal and state justice. In other words, no way we’re going to grab this hot potato. We’re passing the buck to the Biden administration’s Department of Justice and to the courts of Michigan, Georgia, Pennsylvania and other aggrieved swing states. To the civil courts, as well, where Trump and his top surrogates are already being sued in multi-billion-dollar libel cases. And when the crap hits the fan, we can always tell Trump supporters we had nothing to do with it. It was the damned Democrats and a few unholy Republican outliers. 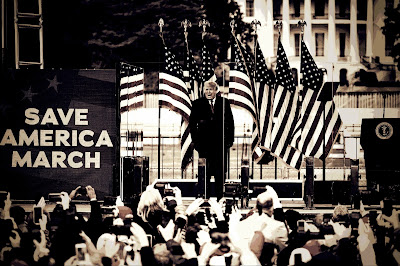 Many media observers were this weekend bending over backwards to pat Senate Minority Leader Mitch McConnell on the back for giving what amounted to no more than a wink and a nod to justice. In a wriggling and convoluted speech that too many analysts found “important”, McConnell said, in so many words, that the ex-president was indeed guilty of inciting the insurrection that took place on January 6th. Not merely because of the seditious speech that he made that day on the Ellipse, but also through his repeated and endless statements to the effect that the election had been stolen, that his voters had been robbed, that he was the legitimate president, and that if his followers didn’t “fight like hell” they “weren’t going to have a country left.” But that, as he interpreted the Constitution, he had no right to judge “a private citizen”. 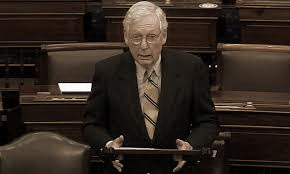 McConnell even found a way to blame the House Democrats for the acquittal, saying that while they had indeed gotten a majority to vote to impeach while Trump was still president, they had failed to deliver the article of impeachment to the Senate until after he had left office. He admitted that constitutional scholars on both sides had provided cogent arguments regarding whether or not a former president could be tried by the Senate. While he praised and said he respected both, he clearly decided on the one that was most convenient for his never-ending political career. Namely, that while he laid the blame for the January 6th attempt to overthrow the US government on one man, Donald J. Trump, his hands were tied.


McConnell’s speech was, in a week of GOP profiles in cowardice, the number one most cowardly act. Only seventeen GOP senators out of fifty would have had to do their patriotic duty and vote to convict in order to restore the integrity of American democracy. In the end, only seven did, and despite the fact that they were only doing their duty to the Constitution and democracy, those seven are being held in hero status by small-d democrats all over the country, because they will clearly be dubbed traitors by the followers of the man who has once more sidestepped Congressional authority, played the country, and bolstered the de facto power of what conservative writer George Will has so aptly described as “the Lout Caucus”. 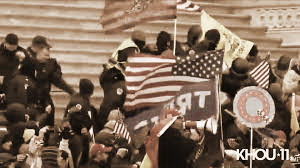 Mitch McConnell could have changed all that. He could have voted to convict and convinced the necessary nine other Republicans to do the same. And by that single act of patriotism and honesty, he could have ensured that no other self-styled despot like Donald Trump ever took office again, and that January 6th, 2021, was a single tragic stain on the fabric of democracy that would never happen again.

But he didn’t. He could have made all the difference in the world to American democracy and he failed to step up. And hopefully history will remember him for it.