GQP: THE PARTY OF Q

I’ve been thinking lately that GOP (Grand Old Party) has become a misnomer for the Republicans. I’m tempted to argue that there’s nothing “grand” about it anymore. Its leadership (such as it is) has relinquished any legitimate pride it once could have claimed regarding American traditions and ideals, conservatism, law and order, defense of democracy, the rule of law, and, of course, all that now obsolete nonsense about being “the Party of Lincoln”. It has embraced extremism, conspiracy theories, mob rule, oligarchic autocracy, born-again racism and personality cultism. But okay, I’ll spot them the word “grand”, because they did come in second for The Most Votes in History in the last presidential election, so....grand, like “big”. Fine. 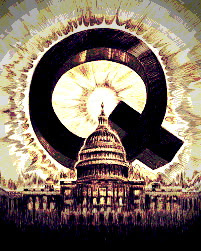 That said, however, there’s nothing “old” about the party that exists today, either. Starting just twelve years ago, the Republican Party quit working for the country and democracy, and went into business for itself and its politicians. After Barack Obama, with a democratic congressional majority in his first four years, worked incessantly to overcome the, until then, worst economic crisis since the Great Depression—a crisis that resulted from a lack of former Republican-led government control over questionable banking, stock market and insurance industry practices—as well as creating an ongoing and developing universal health care program, reforming the financial system, securing America’s commitment to dealing with global climate change, establishing Net neutrality, rescuing the American automotive industry, kick-starting the clean energy industry, cutting veteran homelessness in half, improving worldwide nuclear security and reviving the Justice Department’s civil rights division (among other things)—he found himself faced in his second term with a Republican-led Senate, whose obstructionist-in-chief, then-Majority Leader Mitch McConnell, did his damnedest to block every single bill that the Executive sent to Congress, not on the basis of merit (or lack of same) but simply because it came from Obama.

And for the next four years, under the presidency of Donald Trump, McConnell has continued to obstruct nearly everything coming from the Democrat-led House. Over four hundred bills that piled up on his desk throughout the Trump era and never got a hearing in the upper house, just because they were signed by Democrats and despite the fact that many of them clearly would have improved the lives of average Americans. And he has aided and abetted the ex-president in his obsession with destroying Obama’s entire legacy of good government practices, exceptional international diplomacy and improved social justice.

So, hey, perhaps the Republicans could keep the initials GOP, after all, but just change what the “O” stands for to Grand Obstructionist Party, since the party has become so identifiably obstructionist that it has even backed—whether by commission or omission—former President Trump’s insane attempt to block and overturn by force the outcome of last November’s free and fair elections. To say nothing of also obstructing, as they did the other time he was impeached, any attempt to hold Trump responsible for his misdeeds—in this case, for trying to overthrow the United States government.

That said, there’s a case to be made for calling it the GTP—Grand Trump Party—because from 2016 on, after all politically viable candidates had been culled on the strength of The Donald’s  massive and largely inexplicable popularity (much like that of wildly popular pro-wrestling stars whose fans are fanatically loyal even though it’s obvious to everyone but them that their super-heroes are skillful but unmitigated fakes), a desperate Republican Party, whose only interest had become winning at any cost, allowed itself, at first hesitantly and later enthusiastically, to be usurped by a candidate with the ethics of a snake-oil hawker and the patriotism of a carpetbagger.

And even now, when Trump has lost his chance at a second term and made such a mess of the electoral process that the Republican leadership could have very easily taken the opportunity to cut him loose and take back their party, they have chosen to continue to vie for what’s left of his most rabidly extreme base and forsake all other considerations except offending these populist fanatics. In other words, the GOP continues to be paralyzed by their fear of Donald Trump—or better said, by their fear of further election losses in the future, over and above any patriotic consideration of the nation and its democratic traditions—which would appear ludicrous considering that the Republican Party fared far better in the November elections than Donald Trump did. 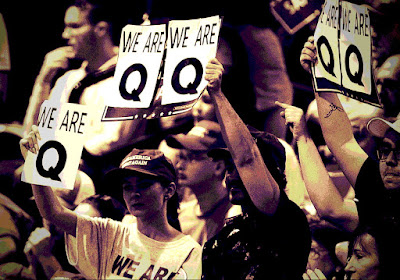 But here we are, following an insurrection in which a Capitol policeman was brutally mob-murdered and several other people died as well, when hundreds of rioters incited by the former president took Congress by storm and forced the nation’s elected representatives to huddle and hide in fear for their lives. An incident of singularly historical importance, in which Trump cultists, hundreds of them, sought to interrupt the democratic process and the official certification of the November elections, and attempted to keep Trump in power by means of a populist coup. And still, only five Republican senators out of a hundred would vote to impeach the former president, while scores of Republicans in the House continue to stubbornly support Trump’s conspiracy theories—debunked in over sixty failed court actions filed by the Trump team and in the rejection, twice, by the Supreme Court of charges regarding alleged election irregularities, as well as by virtue of certification by fifty state attorneys general and the Electoral College—regarding a “stolen election”.

So, my question is, if Trump fanatics are now identifying themselves as “Trump Republicans”, and if the Republican leadership is willing to throw everything the GOP has ever stood for out the window solely in order to hang onto that core of undemocratic personality-cultists who would be perfectly happy to overthrow American democracy in order to keep Trump in power, why not take off the fig-leaf and call the party what it has become—the Party of Trump, or GTP? 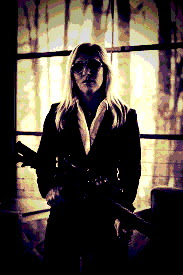 There is another choice, however, that seems to be glaring at Republican leaders from the darkest, densest depths of the violent far-right insurrectionist jungle. Here’s the thing: This past week the GOP started waffling about what to do regarding their Marjorie Taylor Greene problem. And so far, the answer has been, “nothing.” By comparison, the Republican leadership has had no problem whatsoever discussing what punishment should be meted out to Representative Liz Chaney, a highly respected traditional Republican leader and daughter of former Vice President Dick Chaney, for the “heinous crime” of following her ethics, her patriotic duty and her conscience in voting to impeach Donald Trump for inciting insurrection.


You may recall that Georgia Republican Congresswoman Greene, who was swept to office on a wave of QAnon conspiracy theories that she readily endorsed—to the glee of foaming-at-the-mouth, gun-toting, rightwing militants—was praised by Donald Trump as the future face of the Republican Party. You might also remember that she once claimed that California wildfires were being set by Jewish bankers using space lasers, and that she, a couple of years ago, reposted a white nationalist video claiming that the Holocaust was a hoax perpetrated by “Zionist supremacists” who perpetuated it to “promote immigration and miscegenation.” 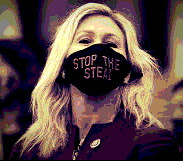 More recently, Greene has done things like embracing British ultra-rightist commentator Katie Hopkins who famously described migrants as “cockroaches”, whom she wouldn’t mind seeing die. Greene’s response? “I would love to trade you for some of our white people here that have no appreciation for our country.” She further termed the results of the 2018 mid-terms as the “Islamic invasion of our government”—in reference to the election of congresswomen Rashida Talaib and Ilan Omar, the first two Muslim women ever voted into Congress.


Not content with that, she has, since the November elections and their violent aftermath, endorsed calls on Facebook for the execution of top Democrats including House Speaker Nancy Pelosi and Senate Majority Leader Chuck Schumer. And, among her most atrocious endorsements is the one for a conspiracy theory that claims the tragic Parkland and Sandy Hook mass shootings were “hoaxes”. She even has gone as far as to harass one of the Parkland victims, David Hogg, on the street, badgering and abusing him verbally and telling him that she had a gun in her purse.

So with Trump’s future being a lot less certain than that of an apparently ever stronger extremist wing of the conspiracy-daft far right, maybe even continuing to embrace Trump is too risky for an ever more acquiescent GOP leadership. Some of the most extreme fringe elements of the far right now believe that they were also duped by Trump. That they gave him their all, obeyed his express wishes and took over the Capitol, standing point and awaiting the declaration of martial law and the military takeover that would restore their leader to power. This, they felt they had been promised by Trump surrogates like disgraced General Mike Flynn and space-cadet attorneys Sidney Powell and Rudy Giuliani. In the end, they were left holding the bag. 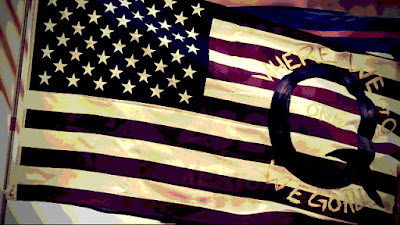 So perhaps then, they will be seeking new heroes, someone more like them, someone like, say, Marjorie Taylor Green, who represents more than the Trump brand. She who was elected to office as the voice of Q.

Maybe, if the GOP is dubious even about giving Greene a slap on the wrist and removing her from committee duty (do we really need a conspiracy theorist who supports old anti-Semitic Nazi fabrications about the evils of Jewish businessmen, or who claims the victims of the Parkland and Sandy Hook school massacres faked it, on the Education Committee?), let alone impeaching her under Article I, Section 5, Clause 2 of the Constitution—for, among other things, inciting rebellion, disseminating false information regarding the fairness of national elections, promoting conspiracy theories designed to incite insurrection, calling for the assassination of national officials, including other members of Congress, and carrying a loaded weapon onto the floor of the House—then why not just add a curlicue to the “O” and rename the GOP the Party of Q or GQP?

That way, the ubiquitous “Q”, a symbol that’s beginning to get some of the kind of traction the swastika did with the Nazis, can be incorporated directly into the party name. And there will no longer be any doubt about where the Republican leadership’s sympathies lie.