THE LESSONS OF CRIMSON TIDE


Remember Crimson Tide, the 1995 feature film in which Gene Hackman is the skipper of a nuclear missile-carrying submarine and Denzel Washington his reluctant first mate? If you haven’t watched it in a while, now’s the time.
In it, civil war has broken out in post-Soviet Russia. An ultra-nationalist rebel military leader called Vladimir Radchenko and his followers have taken over a Russian nuclear missile installation and threaten to trigger a nuclear holocaust if either the Russian central government or the US federal government decides to challenge their power.

Captain Frank Ramsey (Hackman) is the skipper of the USS Alabama, who has received orders to have his nuclear sub in position to launch a pre-emptive nuclear strike if Radchenko should attempt to prepare his missiles for an attack. Ramsey is an old salt and one of the few naval commanders with any real war-time experience. His executive officer, Lieutenant Commander Ron Hunter (Washington), is a modern, highly educated Navy officer with in-depth studies in military history and extensive strategic training but no combat experience whatsoever.
This military generation gap and vast difference in styles lead to rising tension between the two officers even before the plot thickens. On the one hand, Captain Ramsey is a hard-nosed, impulsive, my-orders-above-all, sort of officer, while Commander Hunter is a cautious, discerning, analytical leader who, although highly disciplined, isn’t above double-checking orders that might be questionable or illegal.
The real clash between the two men comes when the Alabama receives emergency action orders. Satellite images appear to show that Radchenko is fuelling up his missiles to launch an attack. The order Skipper Ramsey receives is to launch an immediate preemptive nuclear attack on Radchenko’s facility. As he’s making preparations to do so, however, a second message starts coming in from the naval command. But only half of it reaches the Alabama before a rogue Russian submarine that backs Radchenko attacks Ramsey’s sub and knocks out its communications.
Damage to the Alabama’s communications electronics keeps the sub’s crew from being able to decode the second half of the message. And here, the two officers’ totally different approaches result in a split that has Hunter trying to instill logic and Ramsey bent on obeying the last orders available—to launch a nuclear attack. The drama is a modern version of a story not unlike Mutiny on the Bounty or The Caine Mutiny in which a captain’s refusal to see logic leads to other officers questioning his fitness to continue serving. 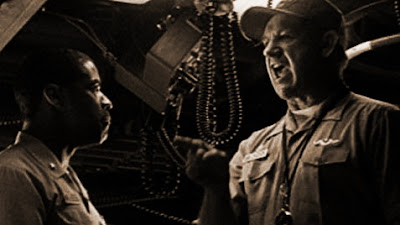 In this case, Hunter reasons that theirs is not the only US sub in the region and that the others will be in possession of the full second order, which may very well be a retraction of the first. And if that is the case, the Alabama may well end up being responsible for initiating nuclear holocaust on the capricious strength of only partial information. Ramsey contends, however, that orders are orders and that without communications, there’s no way for the Alabama to know whether or not the other US subs in the region have also been attacked and perhaps destroyed. His sub may be the last thing standing between Radchenko and a nuclear attack on the United States.
A military drama ensues in which Hunter takes command and confines Ramsey, at gunpoint, to his stateroom. However, in the midst of the mutiny, the Alabama is again attacked by a Radchenko-loyal vessel. After a brief chase and undersea naval battle, the Alabama emerges victorious. But the skipper has managed to take advantage of the chaos to pull off a counter-mutiny and to arm enough men to place Hunter and some of his fellow mutineers under arrest in the officer’s mess. Ramsey again begins the countdown to nuclear missile launch, but Hunter and his men escape and retake command, while in the meantime, the technical crew find a way to repair the damage to communications.
In happy-ending Hollywood style, rugged individualism and Hunter save the day. Commander Hunter halts the nuclear strike, just as the second message is finally decoded, telling the Alabama to stand down from the original orders.
Crimson Tide is supposedly based on a true story of an incident that actually took place during the Cuban Missile Crisis, back in the early sixties. But as the movie ends, you can’t help thinking about how much more capricious, illogical and dangerous the world is today. Even just twenty-five years down the road since the film was made, you tend to ask yourself whether, if something similar happened today, could a worldwide nuclear catastrophe be avoided?
These are some things any sane person is certain to ponder when the chief executive of the US places the Armed Forces on red alert for a preemptive strike on the territory of a foreign power in the morning and by the afternoon has said, well, okay, maybe not. Logically, you have to breathe a sigh of relief that the man in charge—and holder of the nuclear codes—decided against his first impulse.
But that also leads you to realize that it was just that, a personal impulse with no more apparent consideration or consultation than the reactionary tweets for which he is infamous. And then too, you have to realize to what extent the US and the world are subject to the whims of a single American oligarch. And, what all can go wrong in the timespan between the whimsical orders and counter-orders on which his policies turn.