THE JANUARY SIXTH INSURRECTION AND THE CONTINUING THREAT TO DEMOCRACY

It is hard to believe—for me at least— that an entire year has passed since the January 6, 2021, insurrection. The threat to our democracy didn't end with the shameful January Sixth attack on the Capitol and the attempted coup d’état staged by an insane, authoritarian-narcissist president and nearly one hundred fifty seditious lawmakers. On the contrary, democracy has never been under greater threat than it is right now. 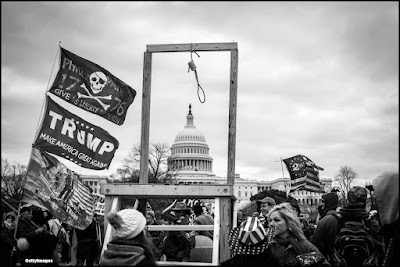 A shocking number of GOP leaders—at a national, state and local level— are actively moving to support state to state legislation specifically designed to restrict and suppress voting rights, while continuing to foster insurrection by perpetuating the Big Lie. They are also avidly going after long-constitutionally-supported reproductive rights, religious freedom and, indeed, hard-fought women’s rights. But above all, they are overtly attacking minority rights that civil rights leaders have fought and sacrificed for since Reconstruction in the post-Civil War days, and which they had apparently won in the turbulent but democratically victorious nineteen-fifties and sixties Civil Rights era. While back then no one would have imagined that, less than sixty years hence the situation for civil rights would do anything but ever-improve, here we are, in a new era of Jim Crow politics—the worst since the post-Reconstruction era of the early twentieth century.

While their rhetoric might be crass, and often openly racist, sexist, xenophobic and unabashedly authoritarian, the methods all but a handful of GOP leaders are employing to sidestep the democratic process are somewhat more subtle. After losing the 2020 election, when the still rational, democratic majority of American voters and electors shouted a resounding “no!”  to a second four-year term for a president who had proven—not surprisingly to anyone familiar with his history—morally, constitutionally and mentally unfit to lead the United States of America, and who pushed the Republic over the brink to the point of near dissolution on one of the blackest days in the country’s history, these agents of authoritarianism are attempting to enact legislation that will make discrimination and voter suppression “legal”, despite its moral and constitutional illegitimacy. The idea is to blatantly gerrymander voting districts and limit voting tools in such a way that minorities of color and pockets of liberal Democrats will be robbed of any means by which to counter the far-right, or to win in the future when they will no longer be a minority, and when whites will become the new secondary ethnicity in America.

Not satisfied with pushing passage of state laws that, in the past as now, hide behind states’ rights as a means of defying historic Supreme Court decisions and, indeed, the Constitution, through legislation that flies in the face of civil freedoms and democracy, the GOP is also actively seeking to change the players in red states where Republican officials did their sworn duty in upholding the true results of the 2020 election. For having done what was right, ethical and legal, those elected and appointed Republican officials are being unceremoniously handed their walking papers. They are being replaced with officials that the GOP leadership at both the state and federal level hope—given a similar situation in the 2022 and 2024 elections, and indeed in all future elections—will put party over country and authoritarianism over democracy and fudge election outcomes, or simply rig the elections from the get-go.

To think that everything we are witnessing here is merely a democratically healthy difference of opinions is naïve and dangerous. Make no mistake about it: These GOP autocrats have been so reiterative and intentional in their bid to undermine democracy and promote single-party autocracy that, according to multiple opinion polls, something like four out of every ten Republican voters actually believe that the 2020 election—one of the most transparent and scrutinized in the country’s history—was rigged and that Donald Trump should be the current president.

The members of the GOP leadership who continue to promote this Big Lie—the same way that Nazi leaders did in their successful bid to dissolve German democracy and install themselves and Hitler as the only political power in that nation—for their part, cannot honestly believe for a minute that the 2020 election was “stolen” from their party. They have all of the data necessary to know that this is a bald-faced lie. Their repeated statements supporting that myth are, then, the height of cynicism, born of a quest for perpetual political power. Their actions and inactions make it absolutely clear that they are perfectly willing to end the two-and-a-half-century experiment in democracy that is the United States of America—once the greatest democratic power on earth, but now a faltering, chaotic shadow of its former self—if it means clinging to power indefinitely. 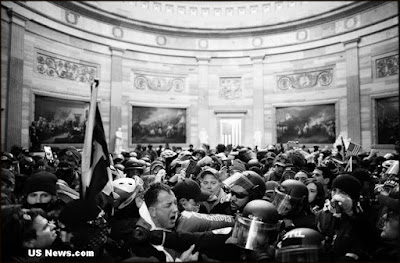 On the road to their now clear goal, there will, hopefully, be staunch resistance. Unfortunately, this promises to pit democrats and autocrats against one another to an ever-increasing degree. That is why, for the first time since the eighteen-fifties, political analysts are weighing the very real possibility of a second American civil war. And what happened a year ago, during the January Sixth Insurrection, when an American president and nearly one-hundred-fifty of his lackeys in Congress, in cahoots with high-rating Fox News commentators, fostered the nearly successful overthrow of the prevailing democratic order.

But those conspirators’ continued machinations prove that there was no victory over violence and sedition on January Sixth, 2021. That was only the drawing of battlelines for a future showdown. Whether that showdown happens on the floor of Congress and in the Justice system or on the streets of the nation in renewed civil strife that pits one group of citizens against another will depend entirely on whether the Republican Party returns to its historically democratic path and Lincolnian principles or continues to present itself as a lawless cult of personality that has declared war on America’s traditional principles of freedom, equality, democracy, and the rule of law.
at 9:59 PM