AN INSANE LACK OF EMPATHY

If anyone, including myself, held out hope that US President Donald Trump might grow an empathy chromosome while he was briefly in hospital with coronavirus, we saw our hopes swiftly dashed when he checked himself out of the Walter Reed Army Medical Center—bolstered by experimental drugs and pumped up on steroids—and went back to the White House for a victory lap and photo op. The president put on a display of machismo by snapping a salute at a Marine guard as he descended under his own power from his helicopter and strode unassisted across the White House lawn and up a flight of stairs to one of the residence’s balconies. Although he couldn’t hide the fact that the brief bit of exercise had left him winded, he defiantly stripped off his mask and saluted the cameras before walking through the balcony doors into the White House, without putting his mask back on, despite the fact that he is very likely still shedding virus like crazy and that several members of his staff were waiting for him inside. 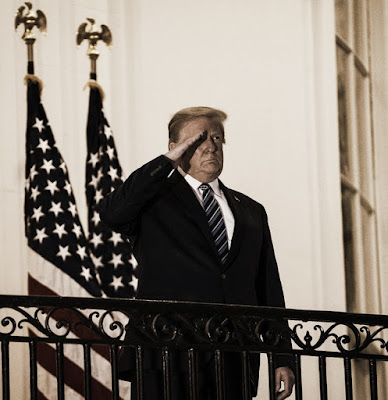 This wasn’t the first time in the last several days that he had endangered those around him. Even during his brief stay at Walter Reed, he got bored and couldn’t bear the temptation to go AWOL from the medical center and gallivant around in an official SUV with part of his security detail, waving at passers-by and making sure images of him up and about and out and around were caught by the mainstream media. Like the mad dictator of North Korea, Kim Jong Un, for whom the president has expressed admiration and even “love”, former reality star Trump seems bent on the puerile goal of painting a picture of himself as somehow super-human, equating, like only the most insecure of immature males can do, not only illness but also kindness, politeness, gentleness, sensitivity, empathy and generosity with unacceptable weakness.


We (who are indeed empathic) understand from Trump’s niece, Mary, and from other reliable sources, that these insecurities are the result of the horrific upbringing that young Donald had under the tutelage of a ruthless father. But no matter how much we might weep for the president’s inner child, the American public shouldn’t be expected to pay the price for Trump’s childhood psychological trauma or his continuing childish pranks. While his behavior throughout the nearly four years of his presidency has been consistently recalcitrant and often questionable, his comportment over the past few days has been socially—almost criminally—unacceptable. And more and more people appear to be noticing.

By leaving the hospital, first to go for a spin in his car and then to return home in the midst of intensive experimental treatment for a deadly and highly contagious illness, and once again refusing to wear a mask when he knows full well that he is infectious, Trump has endangered everyone around him, from drivers and security agents to hospital, household and military staff, to say nothing of his adding to concerns about the plague that is spreading through the White House staff like wildfire after a super-spreader event held without social distancing or masks in the garden of the residence for the nomination to the Supreme Court of Judge Amy Coney Barrett. So blatant has been the attempt by the president to foster a White House reality show about his victory over COVID-19, that an anti-Trump conspiracy theory went viral that his infection with the disease was—as Trump might very well posit if it had happened to an opponent—“fake news”, a hoax, a sham.

But knowing how adamant Trump is about never wanting to appear weak, why would he make up such a story? Some conspiracy theorists said it was to arouse a “sympathy vote” in the upcoming presidential election, since the latest polls place former Obama Vice President Joe Biden at a fifteen point lead over the president for voter intention. Others claimed a more Kim Jong Un scenario in which Trump would go into the hospital apparently stricken, only to emerge resurrected and stronger than ever to try and persuade the public to believe his “superman” reality-show narrative. 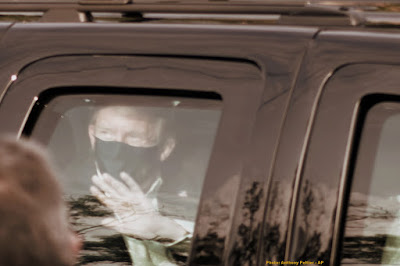 At the other end of the political spectrum, several stars of far-right talk radio and TV oozed once more like pond scum to the surface of their swamp with yet another conspiracy theory—that if Trump had managed to dodge the virus up to now, wasn’t it strange that he’d gotten it just a month before elections? And didn’t the nefarious Democrats perhaps have something to do with it?

Despite the president’s latest performance, however, none of these theories seems likely. And the ostensible facts would appear to be far worse: namely, that President Trump is indeed ill with COVID-19. That he fell ill as a result of his repeated flouting of the science and his utter disregard for scientifically proven protocols. That he is too unaware to realize that the only reason he is feeling substantially better is because, for several days he has been, around the clock, in the hands of some of the United States’ finest physicians. That those physicians have, medically speaking, thrown everything but the kitchen sink at him to make him feel better and get him through his bout with the plague as painlessly as possible. And that the euphoria that he is feeling and that he credits—and this comes as no surprise to anyone—to himself and his “amazing powers of recovery”, is very likely the result of the powerful doses of steroids that doctors are reported to have been administering to him.

Worse still, the president continues to make it “all about him” and to flagrantly and indifferently ignore those around him. The fact is that if he were a socially responsible person, he would remain in isolation until he is no longer a threat to others, since, right now, wherever goes, he is irresponsibly infecting other people and endangering their families. On top of all of this, Trump tweeted on leaving the hospital that he felt “better than twenty years ago” and told his followers: “Don’t be afraid of COVID. Don’t let it dominate your life.”

At a time when there are at least forty thousand new infections a day in the US and when American coronavirus deaths have already topped two hundred nine thousand, no message from the nation’s leader could have been more reckless or un-presidential. A caring, responsible leader would have said, If I can get it, anyone can and although, for the moment, I may be doing exceptionally well, many others won’t. In fact, many others may very well die. Nor am I out of the woods yet, either. So be responsible. Wear masks. Wash your hands. Socially distance. And whenever you can, stay at home.

The president’s break-out from the hospital and his blatant disregard for the health and welfare of those around him isn’t, by any stretch of the imagination, heroic, as he seems to think it is. It is, rather, sociopathic, as has been his administration’s basic denial of the health crisis up to the present. Trump’s horrendous handling of the pandemic in his own “household”—where more and more infections are being reported by the day—is a clear reflection of his mismanagement of it at a national level. And if the incumbent candidate should win another term and roughly half of the people of the United States continue to follow the leader and wantonly ignore the health protocols dictated by science and common sense, Americans can expect, in incredibly short order, to see the COVID death toll climb from an already shocking hundreds of thousands into the millions.